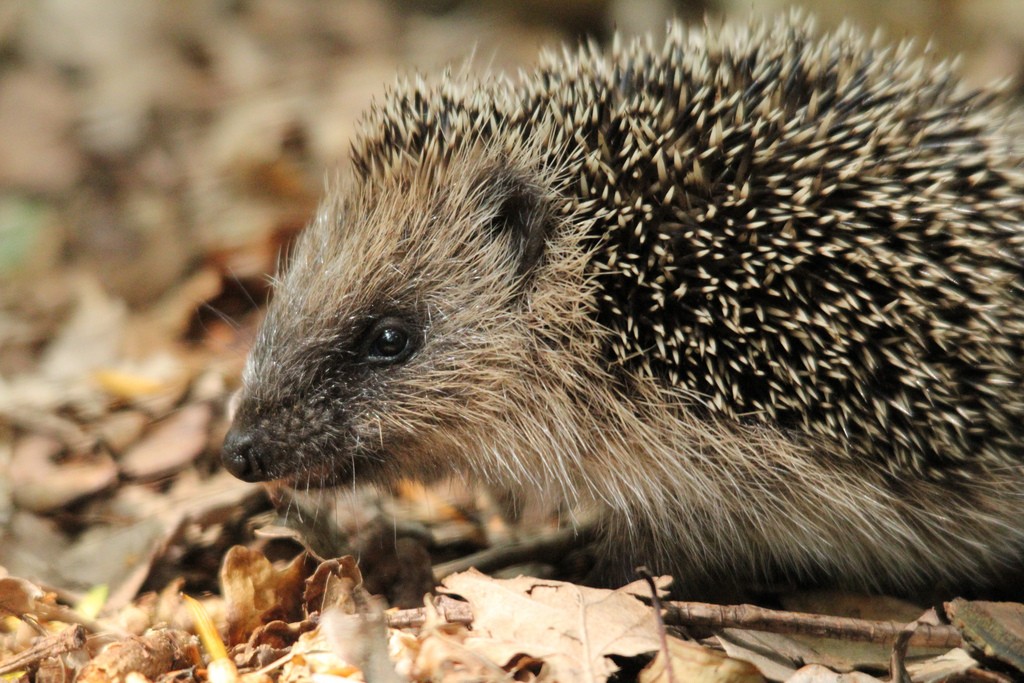 Hedgehogs are in the news with a serious decline in numbers – according to this recent report by David Wembridge, “at a conservative estimate a quarter of the population has been lost in the last ten years”. But things are moving in a positive direction with the Warwickshire Wildlife Trust leading the way in hedgehog conservation in Britain, thanks to funding from the British Hedgehog Preservation Society. Find out more about their pioneering Solihull Hedgehog Improvement Area – part of the Help for Hedgehogs campaign.

Simon Thompson, Hedgehog Officer at Warwickshire Wildlife Trust, gave us some tips on how to help your local hedgehog population:

“There are measures which we can all undertake to provide space for our hedgehogs, the simplest and most important of these is to provide access into and between our gardens. Walls and fences create an impenetrable barrier to hedgehogs and a small hole, about the size of a CD case will easily allow hedgehogs to pass between gardens. Ask your neighbours to do the same and all of a sudden there is dramatically larger landscape through which hedgehogs can find food, nesting sites and potential mates. Once your garden is linked to the wider landscape then having a hedgehog box instantly provides a structure within which hedgehogs can construct themselves a safe and secure nest to sleep during the day or perhaps even hibernate through the winter.”

Hedgehog homes are a safe retreat for the hedgehogs in your garden and provide a warm and dry shelter along with valuable protection from predators. Site your home in a quiet position, out of the prevailing wind, ideally in an area with some cover.

The Hedgehog Nest Box has been designed and extensively tested by the British Hedgehog Preservation Society and provides a safe and snug environment for these wonderful creatures. The box has a predator-proof tunnel and removable roof and is approved by Dr. Pat Morris of London University.

This attractive wicker Igloo Hedgehog Home is designed to blend into your garden. The built-in entrance tunnel provides protection from predators and the Igloo is spacious enough for a family group.

The Hogitat Hedgehog House has an attractive appearance and will fit perfectly into any garden environment. Made of principally natural materials, it has a waterproofed roof and predator defence tunnel. Provides a safe retreat for hedgehogs and other small mammals.

This lucid, beautifully illustrated and comprehensive guidebook is distributed by NHBS – both the authors are experts in habitat restoration and this publication is a significant contribution to approaching the challenges of woodland wildlife conservation in the 21st century.

Woodland Creation for Wildlife and People in a Changing Climate: Principles and Practice, written by David Blakesley and Peter Buckley, and sponsored by the RSPB, Woodland Trust and the Eden Project has recently been published. New native woodland has the potential to make a significant contribution to wildlife conservation in Britain, by supporting flora and fauna characteristic of both woodland and wider countryside habitat. For example, woodland creation provides opportunities for a number of strongly declining woodland birds characteristic of young woodland, such as tree pipit, willow warbler and garden warbler. The bird species benefiting from new woodlands will depend on a number of factors, such as the woodland type, stage of growth and location within the country. As new woodland matures it may be possible to maintain good populations of a number of woodland birds through coppice management or by providing scrub along rides and the

Open habitats in woodlands are becoming increasingly important in a wider countryside context, with the loss of large areas of unimproved grassland, wetland and heathland. Rides and glades in new native woodland can support such communities, and act as stepping stones to facilitate the movement of species through often inhospitable agricultural landscapes. Even small fragments of open habitat in new native woodland can be important in their own right, supporting not just plants, but also a wide diversity of invertebrates, including many of the declining wider countryside butterflies such as small copper and small heath.

This book presents a comprehensive and extensively illustrated guide to the principles and practice of woodland creation. In the first part of the book, the issues underlying woodland creation projects are considered, such as the relevance of different woodland community types. The process of natural succession is described, illustrating the variety of wildlife that may colonise new woods, including birds, insects and plants. Ecosystem services provided by new woodland for people are examined, together with the threat of climate change, coping strategies for biodiversity, and the planning of woodland habitat networks and planting strategies.

In the second part, detailed practical information for anyone creating woodland is presented, from the planning and selection of sites, sourcing of seeds and selecting tree species to woodland design, layout and management. The creation of woodland edge habitat and open ground communities is given particular prominence.

This book should appeal to anyone with an interest in creating new native woodland, planting trees or conserving woodland wildlife.

The long-running Biology of Habitats series from Oxford University Press is the only habitat by habitat treatment of the planet’s biota. Each title in this fantastic series gives an integrated overview of the physiology, ecology and behaviour of the organisms in a specific habitat.

These books are intended for use by students studying biological or environmental sciences, those in postgraduate research and field ecologists seeking in-depth habitat specific information.

We are pleased to offer great savings on these titles – Order today and save 25% on this series!

Browse the full list of titles in the Biology of Habitats series – all at 25% off!