Robinson Moth Traps are the preferred choice amongst many serious entomologists because they offer the highest attraction and retention rates. There are various models available and NHBS offers a comprehensive range – we’ve put together this guide to Robinson Moth Traps to help you choose the right model. We have also included our top tips to improve the efficiency of your Robinson Trap in use.

Robinson Moth Traps are the preferred choice amongst many serious entomologists because they offer the highest attraction and retention rates.  There are various models available and NHBS offers a comprehensive range – we’ve put together this guide to Robinson Moth Traps to help you choose the right model. We have also included our top tips to improve the efficiency of your Robinson Trap in use.

NHBS sells a variety of Robinson moth trap types, varying in both price and specifications.  However, before we get into the differences, let’s consider their similarities.  All our Robinson traps are;

Before we analyse each trap individually, remember that any one of these traps will attract moths in large numbers.  Robinson moth traps fitted with mercury vapour bulbs are the most successful traps for attracting and retaining moths.  On a very good night you can expect 500 – 1000 moths.  So, what are the types of Robinson we offer?

Standard Robinson moth trap:  this long-term favourite is our most popular design and combines a superb design with affordability.  It is larger and more robust than the NHBS Robinson but lacks one or two features of the Heavy Duty Robinson.  This trap is an excellent choice for both professionals and enthusiasts.

Heavy Duty Robinson moth trap:  this trap is robust and durable, making it ideal for prolonged use.  It combines many great features of a Robinson trap to provide a durable design.

When choosing between mercury vapour and actinic electrics, there are several general rules to consider.  Mercury vapour bulbs will attract the largest amount of moths.  However, they are also quite bright.  If using the trap in a small back garden, you may want to opt for actinic electrics.  These produce less light and so are less likely to annoy the neighbours.  Mercury vapour bulbs run hot and so need to be protected from the rain to avoid shattering.  All our mercury vapour Robinson traps come with a rain guard as standard.  Actinic bulbs do not run hot and so do not need protecting from the rain.

If It’s Mercury Vapour You Want…!

If you decide on a Mercury Vapour Robinson moth trap, then NHBS has a range of options to cater for various situations and budgets.

For those wanting the cheapest mercury vapour Robinson trap available, the MV Midi Robinson is the trap for you.  But just because it is the cheapest, it doesn’t mean the quality of the trap has been compromised.  Essentially it is the same trap as our best seller, the Standard Robinson moth trap, but with a few alterations to reduce the price.  Firstly, it’s smaller with a base diameter of 45cm compared to the 60cm base of the Standard Robinson trap.  This makes it more portable but means there’s less space for moths – a potential consideration if trapping on the busiest of nights.  The Midi Robinson has an 80W MV bulb, as opposed to the other MV Robinson traps that all run 125W MV bulbs.  This means the Midi is less powerful and so may attract fewer moths.  However, the build quality and components used are identical to those used on the Standard Robinson moth trap, so the Midi will still provide a durable and effective method of trapping moths.

125W MV Robinson Moth Traps – One of Three to Choose!

When choosing between these three types of trap, you may want to consider the following;

All three trap designs fundamentally have the same 240V electrics with all the necessary chokes, capacitors, etc included.  As they all run a 125W mercury vapour bulb, there won’t be any noticeable differences in light intensity or attraction rates of moths.  Where they do differ is in the cable lengths.  The NHBS Robinson has a short input cable (that runs from the mains plug to the waterproof control box) of approximately 1.5 metres.  The Standard Robinson has approximately 5 metres of input cable, whilst the Heavy Duty Robinson has 15 metres of input cable.  So, you’ll probably need an extension cable for use with the NHBS Robinson.  The output cable (that runs from the control box to the bulb) is short for all three designs (1 – 2 metres). 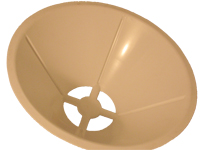 All three trap designs have a white cone and rain guard.  The NHBS and Heavy Duty Robinson traps have similar designs of cone with three flight interception baffles and a sturdy rain guard design which screws tight for rigidity.  The Standard Robinson has four flight interception baffles that are slightly more prominent in profile.  The rain guard, whilst having four supports, does not screw down for security.  Therefore, in high winds it may be prone to being blown over; although if high winds are predicted it’s unlikely you’ll be using the trap anyway!

If you’ve got any other questions regarding the three trap types then please contact customer services.

Regardless of the Robinson design, there are several ways to improve the efficiency of your Robinson moth trap.

Remember to think about the moths too!  Avoid trapping on consecutive nights in small gardens as you may be trapping the same moths, thus preventing them from feeding and mating.  You can reduce the chance of re-trapping the same moths by releasing moths at least 50 metres from the trap site.  Ideally release the moths into dense vegetation so that they have a daytime refuge from predators.  If leaving the trap overnight, try and check it early in the morning.  Occasionally you may find wasps and hornets in the trap.  Wasps may kill moths and hornets will eat them, but both wasps and hornets are docile in the morning so can be removed with minimal effort.  Avoid trapping near known hornets nests.  If you can’t inspect your trap until later in the day, ensure it is in a shady area and place a damp cloth or sponge in the bottom of the trap to reduce the chances of dehydration.

We also provide trap electrics, bulbs and individual trap component separately.  Not all components are listed on the website, so if you can’t find what you’re looking for then get in touch with customer services.  Similarly, if you have any other questions then please get in touch.