Oxford University Press are NHBS’s  Publisher of the Month for February 2019.

Founded in the mid-17th Century, Oxford University Press (OUP) have published some of the most influential environmental books. Nearly 400 years later, OUP continue to release important works as the largest university press in the world. Their diverse repertoire consists of The Selfish Gene, Conservation Drones, Birds in an Ancient World and many more.

OUP’s biology and natural history lists can be traced back to the early twentieth century, when a series of classic academic texts from scientific luminaries such as John Haldane and Julian Huxley firmly established OUP as a science publisher. Its reputation grew  with classic titles including Richard Dawkins’ The Selfish Gene.

OUP’s current book list covers a whole host of biology topics from a variety of ecosystems and across the entire taxonomic spectrum, from viruses to humans. It has a particular strength in the fields of evolutionary biology and animal biology and a growing presence in the fields of ecology, epidemiology, biostatistics, conservation biology, aquatic biology and plant science.

Until 31st march, get great prices on selected bestselling professional and academic titles from OUP.

Oxford University Press, highlights from 2018 and forthcoming in 2019

2018 was a great year with titles including: Birds in the Ancient World, illustrating the many different roles birds played in culture; Skeletons: The Frame of Life, diving into how the tiniest seed shrimp through to the gigantic dinosaurs evolved; Conservation Drones, looking at the use of drones in mapping and monitoring biodiversity; an excellent introduction to the many solutions organisms have evolved to see their world, with Eyes to See and a fascinating account on how ancient DNA is rewriting most of what we thought we knew about human history with Who We Are and How We Got Here.

2019 looks just as exciting, with the following titles due soon:

Discover the numerous OUP titles in our biggest sale of the year – Backlist Bargains, where you can discover great prices on everything from field guides and good reads to monographs and other academic titles.

One of the most rewarding OUP-NHBS collaborations has been in the form of the Gratis Books Scheme. Since 1999, with support and assistance from the British Ecological Society, this scheme has been sending free copies of books to conservationists in developing countries who would otherwise be unable to obtain them.

There are currently two books available in the Gratis Book Scheme, both from OUP. They are Freshwater Ecology and Conservation and  Social Science Theory for Environmental Sustainability.

With a heritage stretching back 200 years, HarperCollins is one of the world’s leading publishers and has an extensive catalogue covering both fiction and non-fiction. We are pleased to announce that they are our Publisher of the Month for November and December.

HarperCollins are pioneers in the world of natural history publishing and are renowned for their extremely popular New Naturalist series, iconic Collins Field Guides and a fantastic range of other natural history and popular science titles.

The New Naturalist series, established in 1945, is arguably the most influential natural history series in the world, and first editions have long been collector’s items. The series has been revitalised in recent years with many more titles planned for the future.

November 2018 sees the arrival of Volume 138 The Burren and in 2019 we can look forward to Gulls and Garden Birds, with The Honey Bee also planned for the end of the year.

We will have a limited number of signed first editions of  The Burren available. Customers with standing orders and pre-orders will be automatically allocated signed stock, but additional copies are limited so place your order now if you would like to guarantee yourself a signed book.

We hope to offer a limited number of signed first editions of future New Naturalist volumes. Priority for these will be given to customers taking out a standing orders for the series:  a standing order ensures you receive all new releases in a series, although they are not a commitment to buy and can be cancelled anytime.  To find out more about setting up a standing order for the New Naturalist series, please contact Customer Services by email: customer.services@nhbs.com or phone 01803 865913. 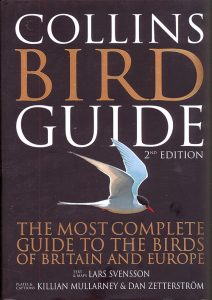 HarperCollins are famous for the distinctive black jackets on their Collins Field Guides. These are consistently popular with naturalists and ecologists throughout Britain. In fact, the Collins Bird Guide is our all-time bestselling book here at NHBS! Covering Europe and the UK’s flora and fauna, these field guides set the benchmark for quality descriptions, illustrations and distribution maps.

The Field Guide series also encompasses guides for other locations around the world, the most recent addition to the collection being Birds of the Philippines. These field guides are written by well-known authors and showcase beautiful artwork from some of the world’s best natural history illustrators.

HarperCollins also publish a wide range of narrative nature writing; from tales of the perilous lives of seabirds in The Seabirds Cry, a celebration of the geological past in Life: An Unauthorised Biography, poignant wildlife studies in The Great Soul of Siberia to the astonishing intelligence of cephalopods in Other Minds: The Octopus and the Evolution of Intelligent Life

We have special offer prices on most of our HarperCollins books from now until the end of the year.  A perfect opportunity to pick up a gift or to treat yourself this winter.

The Ray Society is the NHBS Publisher of the Month for October.  To celebrate this, we have applied some special offers to a selection of their titles. View all Ray Society publications here.

The Ray Society was founded in 1844 by George Johnston with the aim of publishing the types of specialised, yet important, natural history books that were often overlooked or refused by other publishers based on the small profit that they would make. 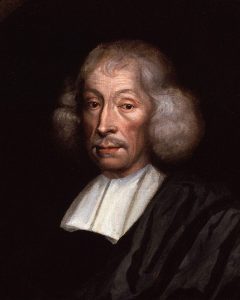 The society was named in honour of John Ray (1628 – 1705), an eminent British natural historian. Ray was born in Essex and educated at Cambridge University. He published numerous works on botany, zoology and natural theology and his theories and writings are widely recognised as laying the foundations for the later works of both Linnaeus and Darwin. 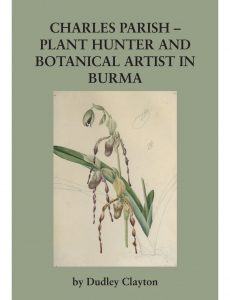 To date, the Ray Society has published 179 books with special, but not exclusive, reference to the flora and fauna of the British Isles. One of their most recent publications, Dudley Clayton’s Charles Parrish, was co-published with the Royal Botanic Gardens, Kew, and includes all of Parish’s stunning paintings of Burmese Orchids. Other notable books published by the Ray Society include Gilbert White’s The Natural history and Antiquities of Selbourne, John Ray’s Methodus Plantarum Nova and An Introduction to Copepod Diversity by Geoffrey Boxshall and Sheila Halsey.

We are delighted to announce that NHBS has recently taken over the distribution of Ray Society publications. The timing is particularly exciting with the upcoming publication of George Else and Mike Edwards’ authoritative and comprehensive Handbook of the Bees of the British Isles. A culmination of over forty years of study, the production of this book has been supported throughout by the Ray Society and much of the original artwork was commissioned and funded by them. 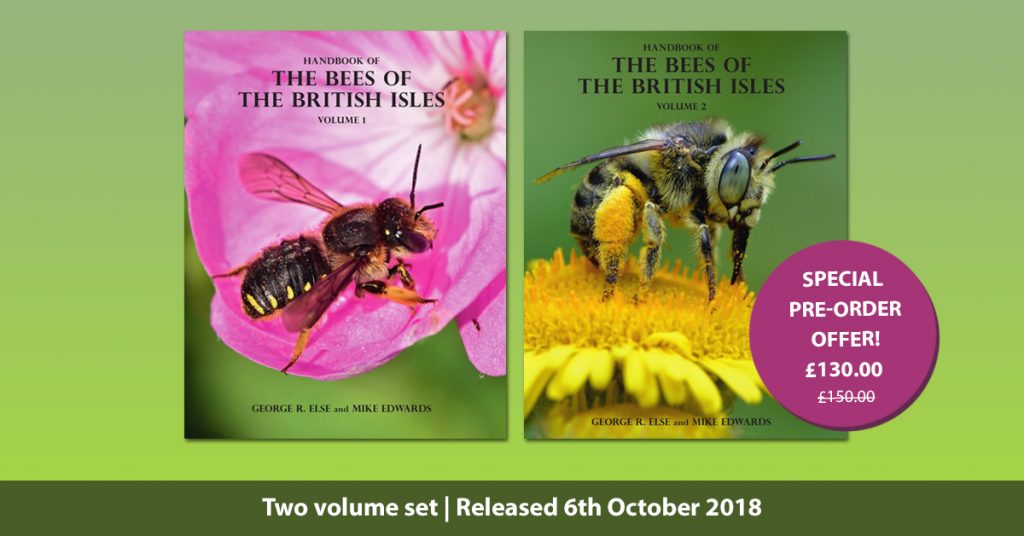 The Field Studies Council (FSC) is the NHBS Publisher of the Month for June.

The FSC publish six diverse, thoroughly researched and constantly expanding series, all of which are geared towards helping naturalists identify and monitor the plants and animals they are interested in.

The FSC’s range of compact identification charts are designed to assist nature enthusiasts with identifying and naming the fauna and flora they find. The first fold-out identification chart, The Woodland Name Trail was produced in 1994 and, since then, these guides have become the FSC’s best-selling publications.

What makes FSC’s Fold-Out Identification charts stand out are the beautiful and accurate illustrations. Many are illustrated by some of the world’s finest wildlife artists including Richard Lewington, Lizzie Harper, Chris Shields and Mike Langman.

The top five FSC guides at NHBS are:

In 2018, the FSC has added three new fold-out identification charts to their extensive selection: 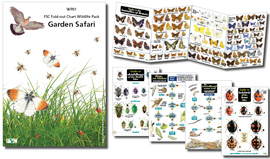 More recently, the FSC have gathered together some of their most popular fold-out charts into Wildlife Packs. Each pack consists of three or more related charts, together with a card-sized magnifier.

In 1976 The ‘AIDGAP’ (Aids to Identification in Difficult Groups of Animals and Plants) project was started, with the aim of producing user-friendly and reliable field guides which would make identification achievable for those with little taxonomic training.

The most recent addition to the AIDGAP series is an updated edition of the Key to the Earthworms of the UK and Ireland, originally published in 2012.

RES Handbooks for the Identification of British Insects

In 2004 FSC started working with the Royal Entomological Society to publish their Handbook series. The aim of these handbooks is to provide illustrated identification keys to the insects of Britain, together with concise morphological, biological and distributional information. These comprehensive books are primarily aimed at experienced users.

The latest addition to this series is RES Handbook, Volume 7, Part 4: The Banchine Wasps (Ichneumonidae: Banchinae) of the British Isles

Browse all RES Handbooks for the Identification of British Insects

Synopses of the British Fauna

In 1991 FSC formed a partnership with the Linnean Society of London to publish their Synopses of the British Fauna series. The first Synopses FSC published was Volume 49,  Woodlice and since then, 60 additional volumes have been published.

The latest addition to this series is SBF Volume 61: Marine Gastropods 2: Littorinimorpha and Other, Unassigned, Caenogastropoda

Browse all Synopses of the British Fauna

The FSC also publishes Atlases on behalf of the Biological Records Centre (part of the Centre for Ecology and Hydrology). Suitable for more experienced users, these Atlases map the distribution of records within Great Britain and Ireland for named groups of animals.

New FSC publications to look out for in 2018 include:

Fold-Out Charts – A new chart covering Invasive Plants is in the early stages of production, whilst the Butterflies Chart is currently being updated to include the Large Blue, Long Tailed Blue, Wood White and the Cryptic Wood White. A second edition of The Caterpillar Chart is also being considered, along with a Field Signs Guide.

The Field Study Council (FSC) is an environmental education charity providing informative and enjoyable opportunities for people of all ages and abilities to discover, explore, and understand the environment.

*We have no detailed information regarding titles that are ‘in preparation,’ however, you can place a pre-publication order by contacting customer.services@nhbs.com

Please note that pricing in this blog post is correct at the time of publishing (June 2018) and is subject to change at any time.

During November 2017, we are offering 20% off University of Chicago Press titles

If universities are hallowed seats of learning, then University Presses surely are their beacons – beaming out knowledge and understanding, keeping the barbarians at bay! And of the world’s University presses, Chicago University Press is in the vanguard, with a long (since 1892) and illustrious list in subjects that are core interests for NHBS customers: ecology, evolutionary biology, palaeontology, earth history, conservation, history of natural history, forests, marine ecosystems, and zoology.

Curators: Behind the Scenes of Natural History Museums
Hardback, March 2017
£21.20

Plant Evolution: An Introduction to the History of Life
Paperback, September 2016
£27.20

The Biology of Reefs and Reef Organisms
Paperback, November 2013
£35.60

Planet of the Bugs: Evolution and the Rise of Insects
Paperback, October 2015
£10.40

The Chicago UP author list is a gallery of some of the world’s most distinguished scientists: George B Schaller on gorillas; Charles Elton and Charles Krebs on ecology; Niles Eldredge, Ilkka Hanski, Michael Ruse and Karl Niklas on evolutionary biology; Andrew Balmford,  Richard Ellis and Stuart Pimm on conservation and biodiversity.

Then there is Robin Chazdon, Susanna Hecht, and Michael Williams on forests;  Tim Caro, Louise Emmons, Thomas Kunz (bats), and David Mech (wolves) looking at mammals and Martin Rudwick on palaeontology and earth history. The list is long and impressive from some of the most original and influential scientists working in their field.

We invite you to take this opportunity to immerse yourself in the learned oeuvre of University of Chicago Press.