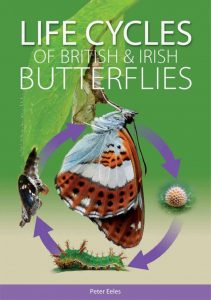 NHBS recently attended Butterfly Conservation’s 2019 AGM in Shrewsbury. The event was highly enjoyable, with many excellent speakers, and we were excited to unveil the brand new NHBS Moth Trap at our stall; lookout for a blog post on this new product shortly.

During the day we also caught up with Peter Eeles, creator of the UK Butterflies website and author of the ground-breaking Life Cycles of British & Irish Butterflies to talk about his fascination with Lepidoptera and the process of writing this incredible book. Peter was also kind enough to sign a number of copies of his book which are now available to purchase here.

1) Could you tell us something about your background and how you first became interested in butterflies?

I grew up on the southern side of Cheltenham, on the edge of the Cotswolds, an area rich in butterflies and other wildlife. It was all rather idyllic and I remember with some fondness the time spent out in the countryside with my fellow explorers! My father and my ‘uncle Fred’ encouraged this interest, but it was watching a Garden Tiger moth emerge from its chrysalis, and seeing scores of Red Admiral feeding on rotting plums, that tipped me over the edge and into a butterfly-filled life.

2) How long did it take you to put Life Cycles of British & Irish Butterflies together?

Two years to write, 20 years to obtain the photos needed, and a lifetime of study! I should say that the book would not have seen the light of day were it not for the contributions of many others, especially members of UK Butterflies (a website that I set up in 2002), the team at Butterfly Conservation, and various experts in their chosen field, such as David Simcox, project manager of the Large Blue reintroduction programme.

3) In your introduction to the book, you detail its aims in relation to Frohawk’s landmark text, Natural History of British Butterflies. You say that Frohawk is one of your heroes: was his work the driving force for you wanting to take on your own project?

I wouldn’t say it was the driving force, but it was certainly a huge inspiration in terms of understanding the ‘art of the possible’, and the amount of field observation and research that would be needed. The driving force was a desire to produce something different yet useful, especially a work that would contribute, in some small way, to the conservation of our butterfly fauna. Something ‘clicked’ when I read several research papers that relied on the identification of a particular larval instar (the period between moults), and I realised that anything that could help the army of butterfly recorders identify each instar and the immature stages more generally would be a great help, with the potential to open up a whole new dimension of butterfly recording.

4) What was the most challenging butterfly lifecycle to document?

That’s a harder question to answer than you might think! Chequered Skipper was challenging due to the amount of travel involved, although a work placement in Glasgow for two years, on and off, really helped! Mountain Ringlet was a challenge due to the remoteness of its sites, its short flight period and its tendency to disappear deep into grass tussocks in anything other than very bright conditions. The Large Blue, which spends most of its life in an ant nest, was always going to be a challenge, and my thanks go to David Simcox, Jeremy Thomas and Sarah Meredith for their help with this tricky subject.

5) There is evidence that butterflies are already being influenced by climate change – what worries you the most about this? Are there any species that you will be excited about seeing more frequently in the UK in the future?

My biggest concern is with less mobile species that are unable to move to suitable patches in our increasingly fragmented landscape, as their habitat becomes unsuitable, or is lost due to development or agriculture. Conversely, it would be nice to see semi-regular visitors, such as the Long-tailed Blue and continental Swallowtail, gain a foothold, just as the Red Admiral and Clouded Yellow can now be considered resident, with records of successful overwintering each year in southern England.

6) Have you any new book projects in mind for the future?

No plans as yet, but never say never!

With detailed descriptions and photos of the adult, egg, caterpillar and chrysalis of each species, this book reveals in detail the fascinating life cycles of the 59 butterfly species that are considered resident in – or regular migrants – to Britain and Ireland.

Browse all our books covering insects and other invertebrates.